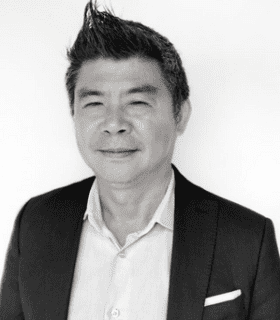 Anurak is an established interior designer and hotel development consultant with 32 years of industry experience. During his career, he has been involved with opening 30 hotels and resorts in the capacity of designer, hotel operator, and owner representative.

He began his career working as a designer with Hersch Bedner Associates, which was followed by a nine-year term as Project Director with Wilson and Associates in Singapore and Dallas. He then served as Senior Design Manager in Shanghai at Hongkong & Shanghai Hotels, followed by a position as Vice President of Hospitality Design at Wanda Group in Beijing.

He also worked as Technical Services Consultant/ Design Manager at Scanlan Associates for Global Design Asia Pacific/ Marriott International. In addition, he has jointly developed a number of boutique hotels for his family business in Thailand.

Anurak has designed and managed award-winning projects such as Shangri-La Barr Jissah Resort & Spa in Muscat, The Venetian in Macao, MGM Grand Hotel & Casino in Macau, and Peninsula in Shanghai.

He is passionate about grooming designers for future leadership roles, and developing his team to be able to execute projects from the business development phase through to completion.

A true creative, Anurak enjoys gardening, sculpture with recycled materials, and playing music with his band. His hobbies include snorkeling, camping and traveling. He is also a real foodie, who likes trying out specialty coffees and creating unique menus.

dmg events is an organiser of face-to-face events and a publisher of trade magazines for the international Construction, Energy, Coatings, Transport, Hospitality & Design industries.